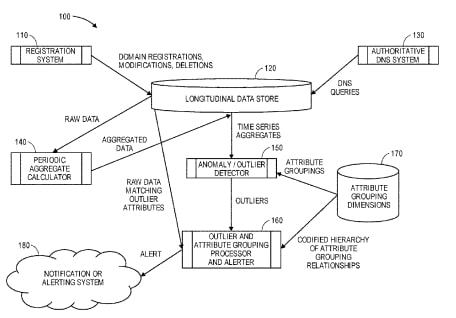 The patent describes a way to track unusual registration activity.

A graphic from Verisign’s patent for anomaly detection.

The US Patent and Trademark Office has granted patent number 11 190479 (pdf) to Verisign (NASDAQ: VRSN) for “Detection of Outlier Domain Registration and Resolution Patterns.”

The patent describes a system that checks for anomalies in registrations and resolution of domain names.

On the recording side, it could track metrics such as:

then check the instances in which the data changes beyond certain limits. This could be used to track promotions, malware registrations, etc.

Verisign says the idea could also be applied to DNS resolution to look for anomalies that may indicate a DDoS attack.

I imagine most large registries have some kind of anomaly detection built into their tracking dashboards.

Sonic Frontiers gets domain name ahead of Game Awards